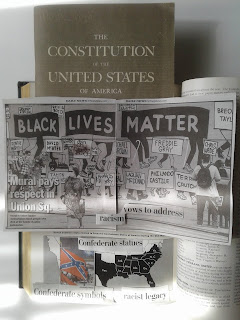 There is a long, documented history of domestic terrorism in the United States. It started with the exploitation, subjugation, and annihilation of indigenous North Americans by invading missionaries and colonists who committed to a belief in their Manifest Destiny with violent dedication.

The Trail of Tears, the Bureau of Indian Affairs, Indian Schools, reservations, bombing Black Wall Street in Oklahoma; the internment of those survivors, lynchings, Rosewood in Florida, the internment of American citizens of Japanese descent during World War II, the Klu Klux Klan (and other Aryan Superiority Societies), unleashing police dogs and pressurized water hoses on American children of African descent during the Civil Rights Movement… These and other similar events are points along a continuum sourced from this country's fundamental ethical weaknesses of white supremacy and chattel slavery, dual expressions of racism.

Full text of Adolph Hitler's Stalingrad Speech, or any of his speeches, really.

The core hypothesis of white supremacy is that low-melanin skin is an indicator of inherent superiority over all other people in a preordained hierarchy of value and humanity, which is arranged from highest to lowest according to skin pigmentation (and gender, since pure white women are necessary in order to continue producing more white boys, who will grow up to become entitled white men). Therefore, every good and excellent human quality, every necessary resource, all desirable opportunities, and profitable endeavors are assigned to whiteness.

If this hypothesis were actually true, then every single Anglo/Caucasian/white person would be a genius because the conceit of white supremacy makes it clear that pale skin pigmentation is the primary indicator of innate superiority. For that claim to prove true, then every white person must be smarter than Katherine Johnson, George Washington Carver, Ursula Brown, Neil Degrasse Tyson, and every black or brown person on Earth.

Is every Anglo/Caucasian/white person you know or have encountered a genius?

What if we obliterated the old, outdated cornerstones of exclusion to replace them with an inclusive 21st-century Declaration of Independence?

We hold these truths to be self-evident, that all human beings are created of equal intrinsic value, that they are endowed with certain unalienable Rights, that among these are Life, Liberty and the pursuit of Happiness…

What if we rigorously followed the terms set forth in articles fourteen and fifteen of the U.S. Constitution?

How much more ethically solid, strong, and stable would we be as a nation?

And to people who support and defend the presence of statues of Confederate leaders in public places of honor, my question is this: Do you recognize the core similarities between the cornerstone beliefs of the Confederacy and the Nazis? If it's immoral and unethical for Germany to celebrate Hitler and his followers (which they proactively addressed publicly as a nation years ago), then the same is true for the U.S. and Confederate leaders. The "Final Solution" era of The Holocaust lasted from 1941 to 1945. Legalized enslavement of people from African nations and their descendants lasted for nearly 250 years, of being listed in household ledgers with furniture and livestock, of being denied recognition as 100% human and full-fledged U.S. citizens, of building a nation without being compensated for their body-crippling, soul-crushing labors. That's what Confederate statues and the bars and stars represent—people who fought to continue using human trafficking and enslavement as the nation's primary economic engine for profit. Forever.


*This post surveys attitudes and environments that embolden people who move through the world applying racist, sexist, misogynistic, homophobic, transphobic, ageist, elitist, xenophobic, and other discriminatory beliefs to justify their mistreatment of other people; their violation of The Golden Rule. Recognizing and dismantling codified systems and entrenched institutions with inequality embedded into their foundations, not individual people, are the focus.