From The Black Count to Black Panther: Page to Screen, Reality and Fantasy 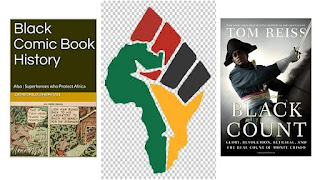 
Bummed that Black Panther II isn’t scheduled for release in theaters until 2022? Black Comic Book History eases that impatience. Before #WeNeedDiverseBooks and #1000blackgirlbooks, Alexandre Dumas created The Three Musketeers, journalist Orrin C. Evans published All Negro Comics, and Morrie Turner was the first black cartoonist whose work was syndicated in mainstream newspapers. Unfamiliar with those names and achievements? You’re not the only one. Demetrius Sherman uses the introduction and seven succinct chapters as a survey of the evolution of black characters in visual media from the 1700s to present day. His research includes images of vintage comics panels and newspaper articles along with sociopolitical context and his personal commentary. Though brief, this informative volume entices readers to pursue more details about Matt Baker, the first black artist in mainstream comics, and others whose names and accomplishments have been underrepresented.

Near the end of Black Comic Book History on page 44, the author hopes “… Hollywood and the comic book industry will leave the offensive stereotypes in the past.” That hope resonates with the Disney Plus streaming service’s current public relations and branding challenges regarding its disclaimer about racist movie stereotypes in its offering of “classic” films. Demetrius Sherman’s book tracks how much the comic book industry, and its migration into film, have grown and expanded to become more inclusive. It also hints that this growth is an ongoing process.


This exhaustive, long overdue biography of General Alexander Dumas (father of the novelist; grandfather of the playwright) offers a historical overview of France, the international geopolitics of Europe and the U.S. and the slave trade before, during and after the French Revolution. The Black Count is constructed in three parts and the sections about military requisitions, battles, and fallout read like swashbuckling adventures.

T.R.'s meticulous scholarship and research pack this true tale with interesting facts and details that flesh out common characters in history like Napoleon, Admiral Nelson, and Marie-Carolina (Marie-Antoinette's sister) in new ways. Every middle- or high-schooler (adults, too) would benefit from being required to read it to make the study of history and politics and civil rights more enthralling.
[Of the 400+ pages, approx. 330 are text; the other pages are reference info.]