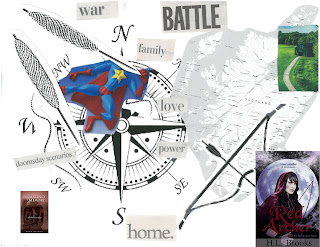 
Book One: Déjà vu started with a recent history set in scenes of violent sensory immersion. Book Two: All Our Yesterdays begins as an acoustic Homeric delivery of the ancient origin story and end-times tale of the legend of Ishtar.

Although Book Two is more of a romance than Book One without sacrificing its action hero intensity, it uses Nina and Daniel’s firmly established personal relationship to explore themes about the importance of having an ethical moral compass in battling philosophical extremism and religious zealotry within the context of their emotional intimacy, and as members of the World Intelligence Security Endeavor. WISE suffers its own internal chain of command and battle weariness issues. The ironically named Concordance Group is only one of their many violent and determined adversaries.

Challenges and crises bombard Nina and Daniel and their friends. The unsatisfactory personal conflict scenario between Nina and Daniel in Book One gets revisited in surprisingly profound ways in Book Two, when Daniel realizes on page 98: This was not Nina’s problem, but his.
How refreshing.

In an odd internal debate passage the crime of attempted sexual assault seems to be equated with unprofessional behavior during the aftermath of a deadly field operation, which may intend to highlight one of the issues in legal persecution of sexual assault crimes compared to reprimands given, or not, for non-criminal infractions against workplace protocols.

Once again, this gifted storyteller blends genres, timelines, generations, nationalities, religions, mythologies, and universes to weave an intricate saga that embodies organic inclusion as it entertains and engages readers on multiple levels.

In Red Archer, now eighteen-year-old August digs deeper into her family heritage while her relationship with 100-plus-year-old werewolf Faolan evolves. Although readers are reminded more than once that August’s non-human species experiences puberty around eight or nine years old, making August biologically a full-fledged adult, the volatility of her emotions and the narrowness of her life experiences are consistent with a fledging human adult. That makes it difficult not to notice that her goals, her priorities, her life choices are all dominated by her focus on her romantic relationship with Faolan, which creates philosophical tension for the featured couple and for readers.

In Red August, the first book in this provocative series, she’s smart enough to graduate early from high school. Not seriously pursuing at least one academic, professional or artistic interest feels like a missed opportunity before the obligations and responsibilities of adulthood fill her schedule. Their euphoric honeymoon phase of rainbows and incendiary sexual compatibility is authentically rendered in lush descriptions and emotionally intimate dialogue. Double standards in May-December couplings based on gender and sexual orientation are briefly discussed. The legitimacy of all forms of healthy romantic relationships regardless of configuration is also reinforced. Once again, the deep connections between August, her mother, grandmother, and other powerful women anchor the narrative.

This second book expands its focus to include more details about the entrenched factions of species purists versus those who are open to assimilation and integration. Fanaticism and warmongering threaten the safety of everyone August and Faolan love in the U.S. and Scotland. H. L. Brooks describes Scotland with vibrant prose that conveys affectionate familiarity as two lovers explore their family legacies. Old ghosts come back to haunt them in unexpected ways that threaten to devastate their relationship, leaving them vulnerable to unforeseen temptations.

Although not a conventional cliffhanger, the ending sets up interesting possibilities for the third installment of this dynamic saga.