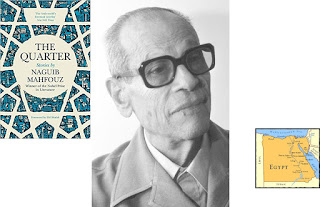 
The Quarter is a time capsule. Found in 2018, these eighteen short stories written in the 1990s offer core samples of Egypt’s cultural layers. Its internal ideological conflicts and agitation from external sociopolitical forces inform the recurring themes of superstition, authoritarianism, and the oppression of women and poor people. Magical realism and mystical encounters regularly occur in this imaginary triangulated terrain of the cellar, the fort, and the fountain, where prodigal residents, bosses, Sitts (grandma, lady, madam), and women of assorted degrees of sexual virtue are counseled, blessed, judged or cursed by the Head of the Quarter and the mosque Imam.

Streamlined narrative structure and thumbnail characterizations suggest influences from the parables of the Qur’an and the Christian Bible. Prose with poetic sensibilities that encourage readers to acknowledge the subtle expression of everyday indignities of generational traditions as in “Bad Luck” when Unlucky Hassan, an adult, describes Sunbula, the object of his questionable affections, as “approaching puberty” as he pouts about his circumstances.

Many of these stories are contemplative. Characters lose and regain consciousness of the world. Intense human emotion is described as a contagion. Privileged people’s insatiable appetite for more wealth, more power sets events into motion, resulting in unpredictable outcomes.

Elif Shafak’s foreword and translator Roger Allen’s introduction provide personal, literary, and cultural context for the author, key elements of his writing process, and the entirety of his known works. When Allen writes, “He [Mahfouz] knew that novelists from turbulent lands did not have the luxury of being non-political,” the risk involved in acting on that knowledge is underscored by the violent 1994 attack against Mahfouz. That stabbing is most probably the reason the handwritten manuscript for The Quarter remained hidden until more than a decade after the author’s death, which is consistent with his career-long exploration of “the evident and the hidden” also mentioned in the introduction.

As a first story, “The Oven” with its focus on the ways in which an individual’s destiny is forged is bookended by the last story. “Tawhida” feels current with its themes of skin color hierarchies and multiculturalism. Ultimately, taking a person out of The Quarter does not take the survival skills honed in The Quarter out a person. This ending concludes the arc of the short story and of the collection before it smoothly segues into the author’s acceptance speech for his 1988 Nobel Prize for Literature as the first novelist in the Arabic language to receive that honor. On page 86, he says, “We are in the age of leaders responsible for the whole globe,” echoing one of the recurring themes in his writing. It resonates as a lament and as a call to action.

There is something visually compelling about the scanned images of Naguib Mahfouz’s handwritten pages of four of the stories. The manner in which they were discovered is reminiscent of unearthing hieroglyphs on papyrus stored in scrolls from ancient times. The messages of those ancient texts are essential components in the cultural and literary continuum, while sometimes being profound and inscrutable at the same time. The Quarter manifests similar tension.