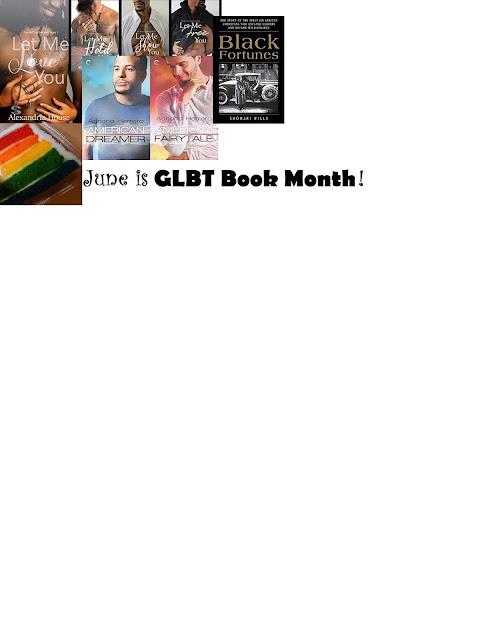 The McClain Brothers, Books 1—4:
Let Me Love You, Let Me Hold You, Let Me Show You, Let Me Free You
By Alexandria House
contemporary romance
Pink Cashmere Publishing  2018


Pineapples. Sextricity.
Just two of the terms Alexandria House spins into hilarious, steamy fun as Everett, Nolan, Neil, and Leland stumble their way into love with complicated, independent women—Jo, Bridgette, Sage, and Kim—who motivate each other to grow up and to step up. Beneath the outrageous raunch, melodrama, and high-frequency usage of ni**a and m-f, poignant overlapping threads about grief, child custody issues, domestic violence, infidelity, delusional obsession, substance abuse, low self-esteem, immigration status, and more create a compelling narrative tapestry. There are distinctive nuances in the characters’ voices shaped by region, age, experience, and personality. Multifaceted emotional authenticity fills each scene.

It’s so refreshing to read about an assortment of strong male characters whose displays of full emotional range are treated as unremarkably normal. That element plus the relatable intricate network of lovers, family, friends, frenemies, business associates, and rivals add depth and substance that linger after the last page has been read. The absence of the beloved McClain parents contributes both melancholy and buoyancy to this family’s connections to each other in a fundamental way that’s surprisingly similar to the Windham historical series by Grace Burrowes.

There are two disappointments: One brother’s complicity in exposing vulnerable women to sexual assault is treated with a somewhat cavalier attitude. Also, the only McClain sister, Kat, doesn’t receive her own full-length story, just a novella and having her journey interwoven across the four brothers’ books.

The entire series more than satisfies the cravings of readers who prefer their romantic fiction grown, sexy, smart, irreverent, and totally unconcerned with political correctness.


In New York City, four best friends who are as close as brothers, Ernesto, Camilo, Juan Pablo, and Patrice, pursue their hearts’ desires professionally and romantically in this compulsively readable series from Adriana Herrera. The Dominican Republic, Puerto Rico, Cuba, Haiti, and Jamaica are their immigrant families’ countries of origin. An infusion of various elements from these vibrant, dynamic cultures enrich the U.S. and Nesto’s and Camilo’s love stories with Jude and Thomas in multiple ways.

The importance of family by blood and by choice is celebrated. Sons’ healthy relationships with their mothers, sisters, female cousins, and aunties are also featured in non-stereotypical ways in this emotionally layered saga about work-life balance and priorities. Xenophobia, bigotry, toxic people, and homophobia are only a few of the heavy threads Adriana Herrera organically weaves into overwhelmingly upbeat yet realistic stories about the risks and rewards of making oneself vulnerable to another person. Profound emotional intimacy combined with joyous indulgence make the explicit sex scenes almost combust from the pages, while the giddy uncertainty of the potential for something exclusive and committed add charm to these men’s courtships. Elements of squick are easily skimmed or skipped without detracting from the overall heat of the characters’ sexual chemistry.

Fans of Cat Sebastian’s historical romances who are in search of some contemporary selections should enjoy this American series.


Ever heard of black Californian land baron and politico William Alexander Leidesdorff? No. What about New York financier Jeremiah Hamilton? Another no. Well, their stories are as fascinating as the tumultuous journeys of the six featured trailblazers: Mary Ellen Pleasant, Robert Reed Church, Ottawa W. Gurley, Hannah Elias, Annie Turnbo Malone, and Madame C. J. Walker, whose ostentatious lifestyle may have been a smoke screen. The introduction to Black Fortunes states that “Black millionaires disrupt the stereotypes of black economic impotence.” This book accomplishes the same.

Meticulously researched and annotated, the text drops facts like explosive knowledge bombs in each chapter. The people of the five major tribes of Oklahoma fought with the Confederacy during the [Civil] war… [page 79] Maya Angelou was San Francisco’s first black streetcar conductor in 1944. [page 106 footnote] Shomari Wills uses a comprehensive examination of region, time, and political climate at the national and local levels to set the stage for each featured individual’s saga in context with familiar historical figures such as Ida B. Wells, Frederick Douglass, and John Brown. The jumps from one biography to another at pivotal moments interrupt the otherwise brisk narrative pacing, but the intrigue and danger entice readers to continue.

One other editorial choice is also jarring: the usage of sanitized terms for the daily atrocities endured by enslaved and oppressed people. “Concubine” and “tryst” are used to describe non-consensual sexual encounters and rape. “Migrants” is substituted for describing newly freed slaves fleeing in terror from racist violence. On page 81, the armed soldiers who force-marched indigenous North Americans on the Trail of Tears are described as having “chaperoned their removal from their homelands.” (Is that erudite sarcasm?) Reading a documented account from one of its survivors or a visit to the Smithsonian’s National Museum of the American Indian will make it clear that annihilation was the ultimate goal of that particular atrocity. Only a few passages suffer from this odd filtering, and the scope and historical interlocking facts of Black Fortunes move across the U.S., social strata, and racial barriers with the drama of an adventure novel.

This text educates, enlightens, and inspires. Everyone would benefit from reading Black Fortunes. Robert F. Smith, the billionaire who recently pledged to pay off the student loans of the 2019 graduating class from Morehouse College is mentioned in the epilogue, bringing present-day relevance to the ambitious triumphs of enslaved and racially stigmatized people who overcame all of the odds against them in the 1800s and early 1900s. Bravo.

*Already busted your book-buying budget? Borrow these works from your local library or request them if they’re not available. Doing so is free and helps build buzz about worthy titles from smaller presses and lesser known authors.